Haven’t found the right bike to meet your needs?  Check out these other bikes for some possibilities. 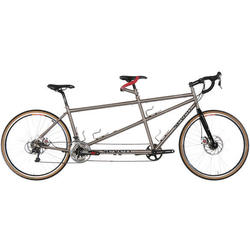 Seven Cycles Axiom SL 007 Frame
How do you make road rides even more enjoyable? Bring a partner along with Seven's Axiom SL 007 Tandem Frame. It's individually tailored for both captain and stoker for a perfect fit and an ideal ride. Seven's Argen double-butted-titanium tubing adds to the magic and delivers outstanding lightness, ride-all-day compliance, and quick, confident handling. In short, the Axiom SL 007 is an amazing tandem for racing, club rides, fitness, and epic adventures. 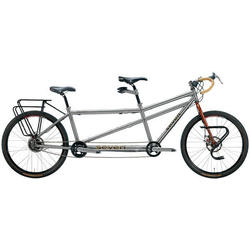 Seven Cycles Sola SL 007 Tandem Frame
Double the fun of your off-road adventures with Seven's Sola 007 SL Tandem Frame. It's individually tailored for the captain and stoker to ensure you both have the ride of your life. And, it's handcrafted from Seven's Argen double-butted-titanium tubing for a premium blend of lightness, compliance, and durability to keep you and your riding partner pedaling happily mile after mile. Grab a friend and explore to your hearts' content on the Sola SL 007. 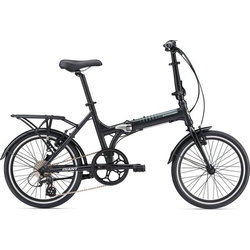 Giant ExpressWay 1
$600.00
Who says your daily commute must be mundane? Turn everyday trips into adventures with this smart fold-up bike. Whether you’re carrying it on the train or pedaling through city streets, Expressway has everything you need to make your commute faster and more fun. The lightweight, durable aluminum frame is outfitted with quality brakes and easy-to-use gear shifters. Its slick folding design lets you pack it up easily for storage or transport. And the 20-inch wheels are small enough to stay out of the way but large enough to roll smoothly, even through rough city streets. - Folding ALUXX-grade butted aluminum frame - Wide-range 8-speed Shimano trigger shifting - Rear carrier and strap, fenders, kickstand, and carry/storage bag

Surly Big Fat Dummy - 2019
$3,025.00
The Big Fat Dummy is a long tail cargo bike that took a few too many doses of growth hormones. At first glance, you might say that Surly just put bigger tires on a Big Dummy. But if you said that, you'd actually be very wrong so just… don't. Think of Big Fat Dummy as more of a second or third cousin to Big Dummy rather than a brother. They share some of the same DNA and look sort of similar, but they're two very different bikes and really only interact when they both reach for the potato salad spoon at that family reunion that no one really wants to be at anyway. Now that that's out of the way, let's get down to the nitty gritty of what makes this hulking beast of a bike tick. Surly's goal with designing a cargo bike around fat tires was to create the most stable, stiff, and traction-laden ride possible while hauling a ton of stuff. Big Fat Dummy has a longer toptube and slacker headtube than its more svelt cousin giving it a nice, predictable, and stable ride. They also used thinner, lighter tubing to construct its cargo area so while it's an overall burlier bike, there's not much difference in weight. Big Fat Dummy accepts either 10mm or 12mm axles in the rear with a spacing of 190/197mm. That big ol' spacing equates to one thing: tire clearance for days. Big Fat Dummy maxes out at a massive 26 x 5.25" tire.* While that large of a tire provides the most traction and stability a bike can possibly offer, it's also a lot of rubber to push and might not be for everybody. Luckily, Big Fat Dummy is also a blast to ride with 3" tires too. It uses the same 100mm suspension-corrected fork as the Wednesday, meaning if you want to add a little squishy squishy to your ride, you can throw a Bluto on and let ‘er rip. If you intend to carry a passenger on your Big Fat Dummy, Surly requires use of their Dummy Rail Collars. These provide a secondary retention system for the rack, as well as stiffen the rack system. In addition, a stoker handlebar set up, found on tandem bicycles, is recommended as well. Make sure to check with seat post manufacturer for stoker handlebar compatibility. All Big Fat Dummy framesets and bikes ship with a Dummy deck, rails, bags, and the aforementioned Dummy Rail Collars so you can immediately start hauling cargo — human or otherwise. Big Fat Dummy is ready and willing to carry all sorts of crap — literally. It's already in use on an organic farm in Ecuador so it's likely that it's hauled some form of manure by now. *Using a 26 x 5.25" tire will cause some drivetrain limitations.
Page 1 of 1